This short history of the FemEdTech Quilt formed part of a post on femedtech.net.

The FemEdTech Quilt of Care and Justice in Open Education was a craft activism project led by Frances Bell in collaboration with members of the FemEdTech network in 2019/2020. FemEdTech is a reflexive, emergent network of people learning, practising and researching in educational technology, and committed to feminism and social justice. We are an informal organisation with no funding: our resources are our passion, kindness, knowledge, enthusiasm and volunteer time.

Ideas for a FemEdTech Quilt emerged following the 2019 OER Conference (OER19) and took further inspiration from the themes of OER20: The Care in Openness, particularly around care, criticality and sustainability. An open call was issued along with the OER20 Conference call for proposals, inviting all sewists and non-sewists, artists and dabblers, crafters, makers and writers, to contribute to the quilt by donating fabrics and found objects, creating quilt squares, and/or writing stories and reflections. 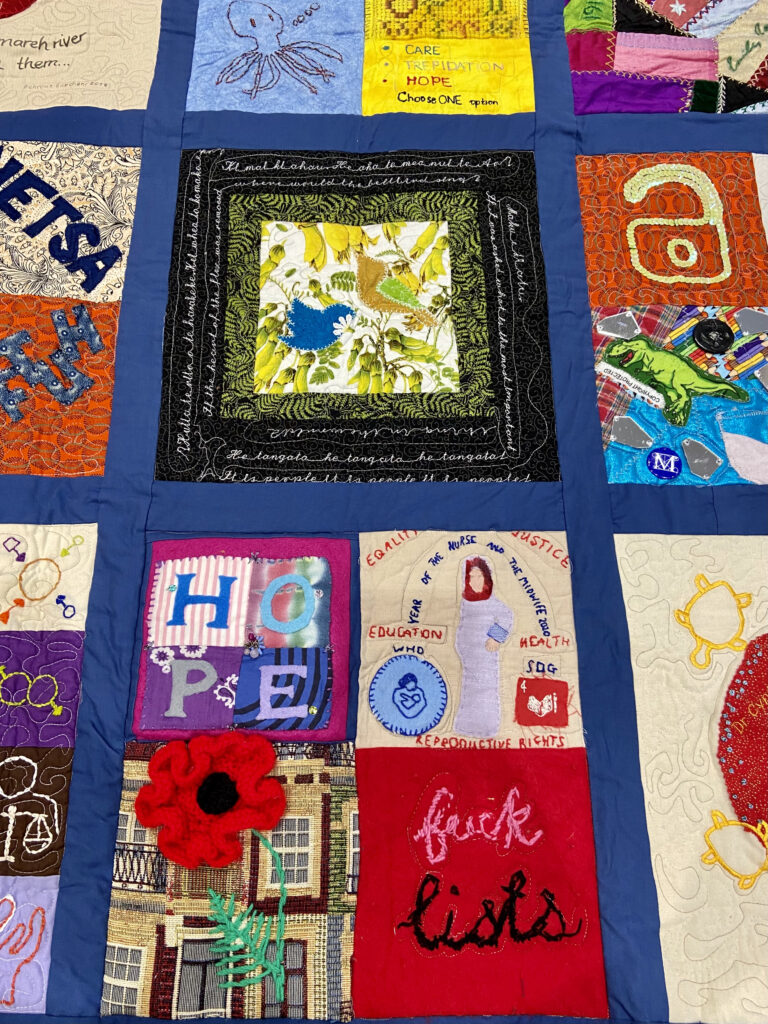 The project was originally intended to have three parts:

There was an overwhelming response to the invitation to contribute to the quilt, with 67 six-inch and 17 twelve-inch squares being sent in from around the world, along with fabrics and other artefacts. As contributions arrived, the quilt grew in size from a single artefact to four linked quilts, each assembled by Frances Bell, Suzanne Hardy, and a group of volunteer quilters and sewers in Macclesfield, UK.

A corresponding digital quilt was created by Anne-Marie Scott at https://quilt.femedtech.net/. This enabled contributors to reflect on the process of creating their quilt squares and to tell the stories behind them. The digital quilt was also intended to allow those who were unable to attend the OER20 Conference in person to see and explore the quilt and its stories.

In the optimistic days of early 2020, when beautiful creative quilt squares were being sent in from all over the world, we could not have foreseen the advent of the global pandemic and the impact it would have. At the same time, we could not have imagined just how necessary the FemEdTech Quilt would become as a project of hope in those dark days as the threads of our shared labour wove the FemEdTech community together.

With the advent of the pandemic, the theme of OER20, The Care in Openness, could not have been more timely or prescient. ALT rapidly moved the conference online and lifted the registration fee, enabling over 1000 participants to come together from all over the globe. Although the pandemic initially deprived us of the opportunity to experience the physical artefact of the quilt, it became a powerful material manifestation of care, compassion and activism. Frances produced and presented a beautiful film about the making of quilt for OER20, which resulted in an upswell of collective emotion that, like the quilt itself, was “beautifully imperfect, imperfectly beautiful.” In the words of Su-Ming Khoo, the quilt became “somewhere to put our connection and our gratitude”.

The FemEdTech Quilt of Care and Justice continues to stand as a powerful symbol of the strength and solidarity that can be gained from shared labour, the sense of community and belonging that traditionally derives from women’s work, and the power of craft activism.