Earlier this month I took some time out from my Edinburgh work to travel to Vienna to take part in the Wikipedia for Peace editathon organized by Wikimedia Austria to coincide with Europride 2019. The event brought together twelve editors from all over the world to create and edit LBGT+ articles in a range of European languages over the course of four days. Unfortunately I missed the first day and half of the event as my travel plans were thwarted when a tree brought down overhead power lines on the West Coast mainline, my train to London was cancelled and I missed my flight. Not the most auspicious start! I eventually managed to get to Vienna on Thursday afternoon in time for a walk around the city visiting significant queer sites, including the home of Josef Kohout, whose experiences of incarceration in a Nazi concentration camp are recorded in Heinz Heger’s The Men With the Pink Triangle. Later in the day we made our way to Wikimedia Austria’s offices for an online meeting of the LGBT+ User Group, which is in the process of scoping a role for an LGBT+ Wikimedia at Large.

On Friday our group spent the morning discussing LGBT+ strategy within the global Wikimedia movement. Issues that were raised included addressing homophobia and discrimination in some Wikipedia chapters and communities, educating Wikipedians around issues relating to gender identity, the need for multilingual LGBT+ style guides, particularly addressing how to write about trans individuals on the encyclopedia without misgendering them. We also felt strongly that as a condition of funding, the Wikimedia Foundation should require chapters to demonstrate how they are actively supporting and promoting equality and diversity, while acknowledging that how chapters are able to do this will look very different across the world. Wikipedia for Peace 2019, CC BY SA 4.0, Mardetanha on Wikimedia Commons

Friday afternoon was devoted to editing. When I applied to Wikimedia UK for a project grant to attend Wikimedia for Peace, I said that I hoped to create some articles around bisexual topics and individuals, which are sometimes marginalised in the LGBT+ community. The first article I created was Bi Academic Intervention, group of bisexual academics, researchers, scholars and writers, which was formed at the 11th National Bisexual Conference in Notttingham in 1993, an event that I coincidentally attended.  I also translated articles on Sápmi Pride and Serbian gay rights and peace activist Dejan Nebrigić, who was murdered in Pancevo in 1999. That article prompted one of our participants to write a new Serbian article on Arkadija, the first LGBT+ organisation in Serbia, founded by Nebrigić and colleagues in 1990. I translated that article into English too, though it still needs a bit of work to bring it up to scratch.

The total outputs of the Wikipedia for Peace editathon are:

Plus hundreds of images of the Europride village and parade. This is a huge achievement for the event, and a significant contribution to improving equality, diversity and queer representation on Wikipedia. The parade itself took place on Saturday in 38 degree heat. How the drag queens in their finery and the kinksters in their leather and latex survived is beyond me. I haven’t seen a final estimate of how many took part in the parade, but one press report the following day said 500,000 people attended the event, which I can quite believe. The whole atmosphere was very friendly and laid back and I particularly appreciated the fact that the parade was un-ticketed and open to all. Like Pride parades the world over, there was a visible corporate presence but it was much less obvious than at some other events. Like everyone there, I took a ridiculous number of pictures of the parade, 60 of which I uploaded to Wikimedia Commons as part of the Wiki Loves Pride competition. Huge thanks to all the amazing participants who were so happy to be photographed.  It’s been a joy to see more and more pictures of both Wikipedia for Peace and the Europride Parade being uploaded to Commons over the last fortnight. 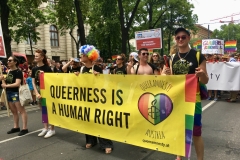 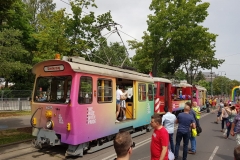 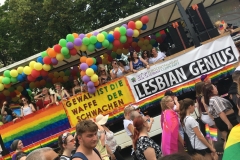 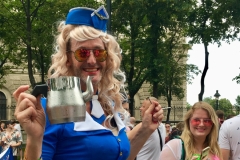 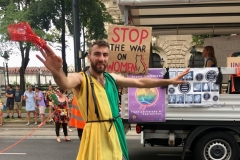 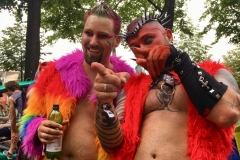 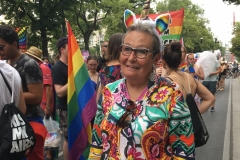 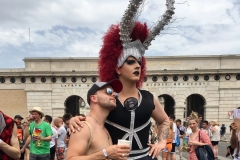 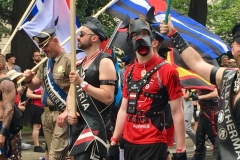 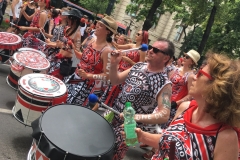 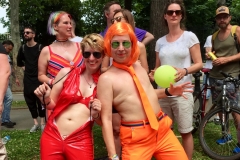 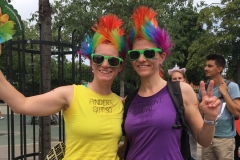 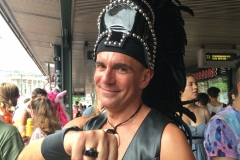 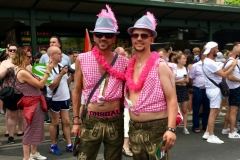 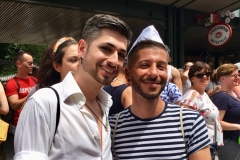 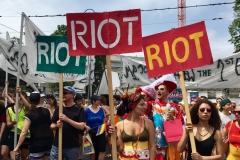 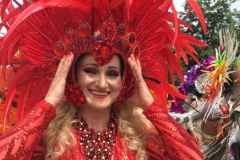 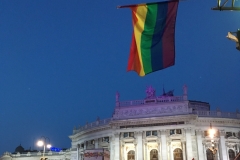 All images CC BY SA 4.0, LornaMCampbell on Wikimedia Commons

I’ve carried on working on my Wikipedia articles since getting back from Vienna, and am hoping to create a new article on Scottish Aids Monitor as part of Wiki Loves Pride. So much of the queer history of Scotland and the UK is poorly represented on the encyclopaedia, if it appears at all, so I hope I can make a small contribution to improving representation, and work with the Wiki community to address equality and diversity across the movement.

I’m immensely grateful to Wikimedia UK for funding my travel to Wikipedia Loves Peace, to Wikimedia Austria for organising and supporting the event, to all those who participated (it was amazing to meet you all), and last but not least, to Thomas for making it all happen and for looking after us so well during our time in Vienna ♡

Next week I’ll be taking a little time out from my work at Edinburgh to go to Wikipedia for Peace at Europride 2019 in Vienna. Europride promotes lesbian, gay, bisexual, trans (LGBT) and other queer issues on an international level through parades, festivals and other cultural activities.  During the event a group of international editors will be coming together to create and edit LBGT+ articles in a range of European languages.  The event, which is run by Wikimedia Austria, is part of the Wikipedia for Peace movement which aims to strengthen peace and social justice through Wikimedia projects. Wikipedia for Peace organises community projects which bring together Wikipedia editors and people active in social and peace movements.

Although I’m not exactly the world’s most prolific Wikipedia editor, one of my proudest editing achievements is creating a page for Mary Susan McIntosh during one of Ewan McAndrew’s early editathons at the University of Edinburgh.  McIntosh was one of the founders of the Gay Liberation Front in the UK, and a member of the Policy Advisory Committee which advocated for lowering the age of male homosexual consent from 21 to 18.  As an academic criminologist and sociologist, she was one of the first to present evidence that homosexuality was not a psychiatric or clinical pathology but rather influenced by historical and cultural factors, and her paper The Homosexual Role was crucial in shaping the development of social constructionism.

I had never heard of McIntosh before writing her Wikipedia entry and it was shocking to me that such an important activist and foundational thinker had been omitted from the encyclopedia.  I hope I can use my time in Vienna to create articles for other overlooked individuals from the queer community.   I’m particularly interested in focusing on the creation of articles around bisexual topics and individuals, which are sometimes marginalised in the LGBT+ community.  So if their are any LGBT+, with emphasis on the B, topics or individuals that you think should be added to the encyclopedia, please let me know!  You can also participate in the event remotely by signing up here.

I’m also looking forward to having an opportunity to photograph the European Pride Parade for Wikimedia Commons.  I think this will be my first Pride since 1998!

I’m immensely grateful to Wikimedia Austria for supporting my attendance at this event, and to Wikipedia UK for funding my travel through one of their project grants. Wikimedia UK’s project grants support volunteers to complete activities that benefit the organisation’s strategic goals including creating and raising awareness of open knowledge, building volunteer communities, releasing information and images under an open licence, and technology innovation. You can find out more information about project grants and how to apply here Wikimedia UK Project Grants.