This year’s annual ALT Conference was a bit of a different experience for me as it’s the first time in years that I wasn’t speaking or doing social media coverage, I was “just” a delegate among over 300 others, and honestly it was a welcome experience just to be part of that community and to listen to and learn from colleagues across the UK and beyond.  This was the first ALT Annual Conference to take place entirely online, and although I was only able to dip in and out over the course of the three days, I got a real sense of the buzz around the event.  It really did feel like a broad and diverse community coming together.

With the launch of the ALT Framework for Ethical Learning Technology, ethics was a central theme that ran throughout the conference.  The Framework is an important and timely initiative co-created by members of the community and led by ALT Trustees Bella Abrams, Sharon Flynn and Natalie Lafferty. The aim of the Framework is to provide scaffolding to help learning technologists, institutions, and industry to make decisions around technology in an informed and ethical manner. This work is very much a starting point and over the next year, ALT will be gathering case studies and example policies from across the sector.  At Edinburgh, we’ve already submitted our open licensed Lecture Recording Policy as an example.  Speaking in a panel as part of the launch, Javiera Atenas suggested that we use the Framework as a starting point and urged us to go further than the principle of Do No Harm when it comes to gathering and using data. 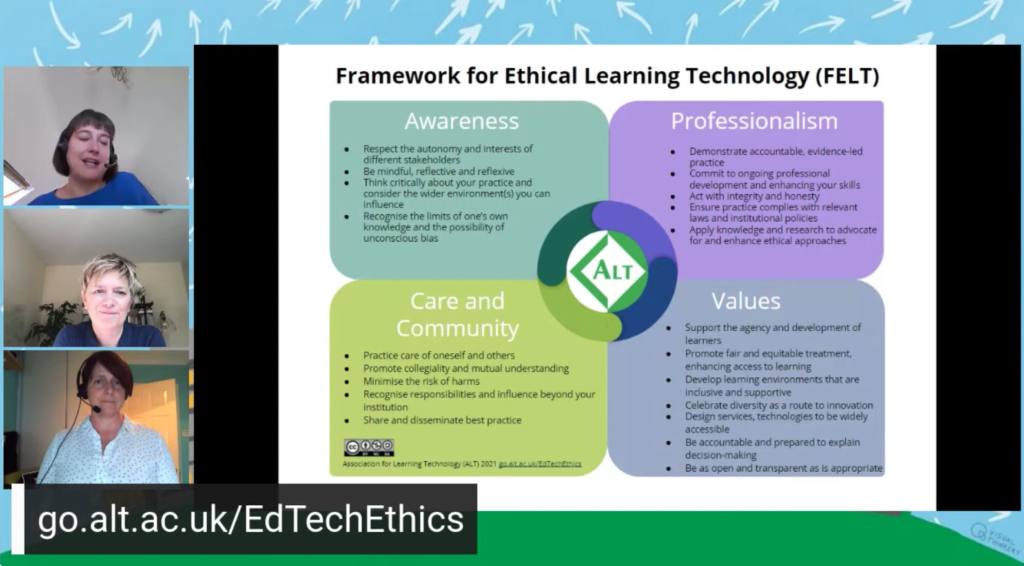 Sonia Livingstone’s keynote also focused on the ethics of data use and the quantification and instrumentalisation of learning.  We operate in a system where learning is rendered invisible if it cannot be quantified, and increasingly we’re moving from the quantification of learning to the datafication of everything.   Sonia asked a lot of hard questions, including what does “good” look like when it comes to children’s data rights, and how do we ensure children’s agency and participation in the collection and use of their data? 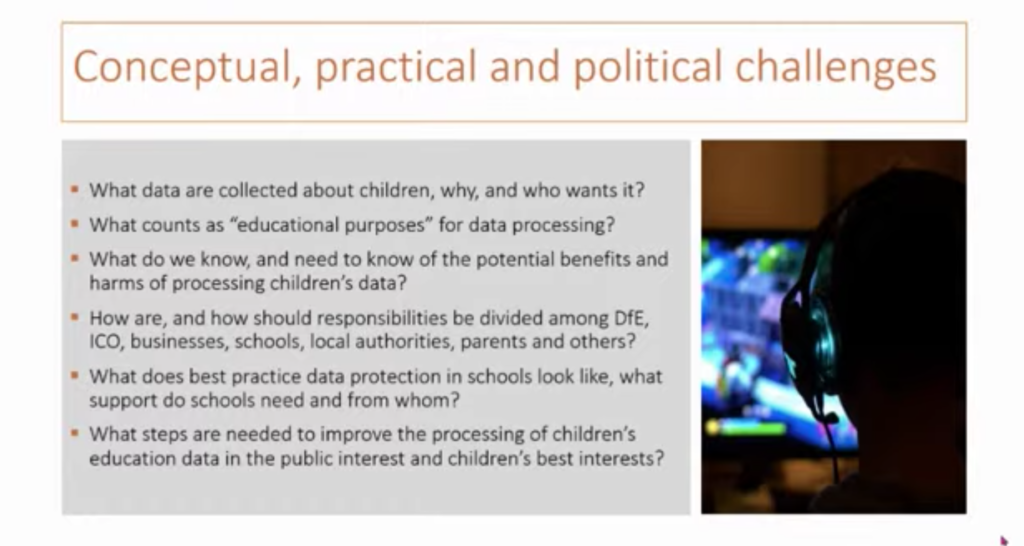 Mutale Nkonde’s keynote explored the intersection of ethics and technology in her revealing dissection of the racist nature of the TikTok algorithm and the impact this can have on real lived experience.  We know that algorithms and technologies reproduce racial biases that exist in society, but we lack the literacy to be able to view and talk honestly about ourselves as victims and perpetrators of white supremacy. Mutale introduced the Framework for Racial Literacy in Technology which provides us with the means to talk about racism and algorithmic bias through cognitive, emotional and active lenses.  Mutale challenged us to ask ourselves, when we are creating algorithms, how can we optimise them for fairness and justice?  How can we make the lives of marginalised peoples better rather than promoting those who are already privileged? 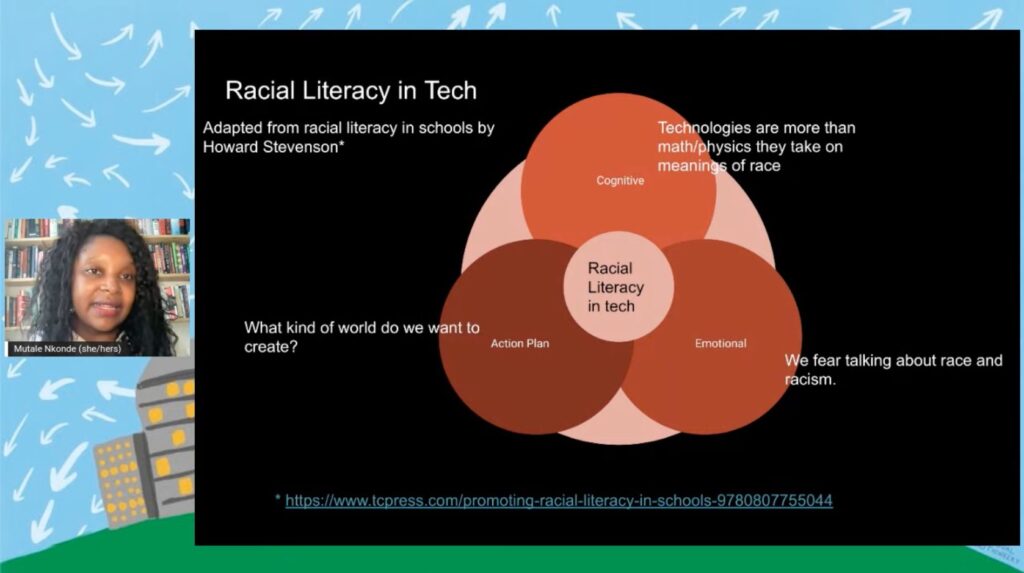 As the parent of a teen who is a frequent TikTok user, Mutale’s talk left me with a lot to think about and discuss with my daughter.  At 15 she is well aware that TikTok is a massively racist platform and she knows that the way the algorithm pushes content to users can be extremely harmful.  In particular she highlighted the prevalence of content relating to self-harm and trauma dumping.  On the one hand I’m glad that she has sufficient digital literacy to recognise that the content she views is being manipulated by the platform, but at the same time it’s deeply concerning that harmful content is being pushed to users at such a young age.

Lou Mycroft’s keynote was one of the highlights of the conference for me.  I’ve been familiar with Lou’s work for a long time and have often seen the #JoyFE hashtag passing on my timeline, but this is the first time I’ve heard her talking about the philosophies and ethics that underpin this amazing collective.  In an inspiring and expansive talk, Lou explored an ethics of joy as characterised by Spinoza’s concept of potentia; by practising joy, we enact our power in the form of potentia.  Lou challenged us to use our potentia to drive change, and resist the fatal pull of “gobackery”, the gravitational pull of the old.  While Lou acknowledged that the ethics of accountability and KPIs will not be changing any time soon, she argued that we can have parallel values based on an ethics of joy, and urged us to put our core values into strategic planning, asking; What might assessment look like as a process of hope? What might induction look like as a practice of compassion? Or timetabling as a practice of equity?

One of the points Lou made in her talk, which stopped me in my tracks, was that right now Higher Education carries a burden of pain.  It’s true, we all know that, we all feel that pain every day, but to hear it stated so plainly was transformative.  However there is still a place for hope and joy.  In a sector that currently appears to be exercising all its considerable power to pull us back to old entrenched ways living, working, being, learning, we need to use our own hope and joy to keep driving change forwards.  To do that we need educator lead communities with explicit shared values and affirmative ethics.  I believe ALT is one of those communities, with its shared values of openness, independence, participation and collaboration.

As is inevitable with such a packed programme, and juggling the conference around existing work commitments, I missed so many sessions that looked really interesting, including several by colleagues here at the University of Edinburgh and one on Using OER to empower communities of undergraduate scholars by Carlos Goller.   I’ll look forward to catching up with the recordings of these sessions in the coming weeks.

Right at the beginning of the conference, co-chairs Farzana Latif, Roger Emery, and Mat Lingard asked us when we first attended an ALT Conference or whether we were new to the event.  My first ALT Conference was in Manchester in 2000, where I presented a paper with Allison Littlejohn and Charles Duncan called Share and share alike: encouraging the reuse of academic resources through the Scottish electronic Staff Development Library.  It’s amazing to see how the ALT community has grown and developed over the last 20 years.  I look forward to seeing where the next 20 will lead us.

Enormous thanks once again to everyone who made this year’s ALT Conference such an inspiring and joy-full event, particularly the co-chairs, the keynotes, and of course Maren Deepwell and all the ALT team. 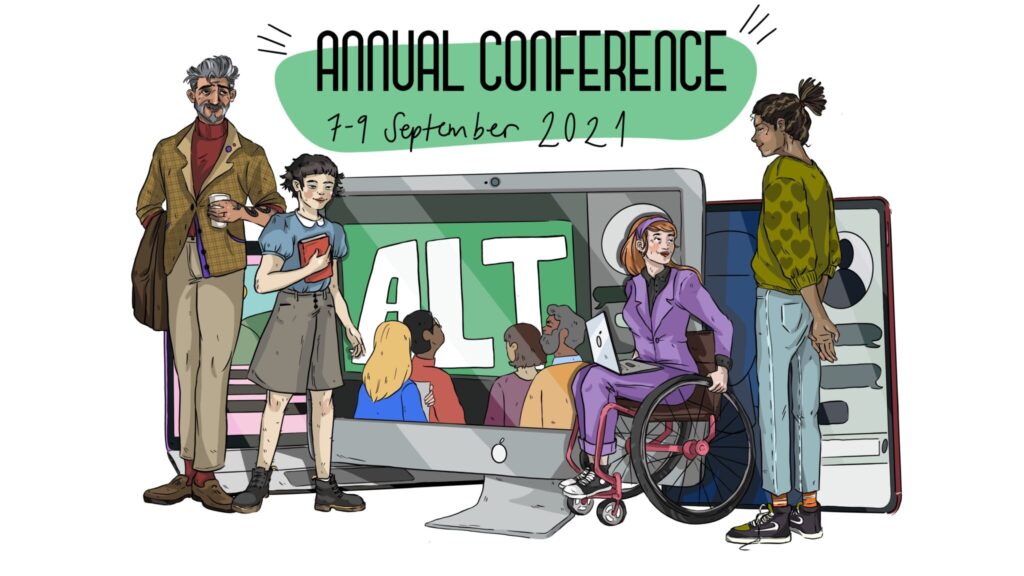