It always takes me a while to write my post OER Conference reflection because I invariably come back brimming with so many thoughts, ideas, emotions and new perspectives that it’s hard to know where to start. When Catherine Cronin introduced the themes of OER19 Recentering Open: Critical and Global Perspectives at the end of OER18 in Bristol she stressed the imperative of moving beyond hero narratives and including marginalised voices, and the conference certainly met that challenge.  Rarely have I had the privilege to be part of such a diverse, inclusive, respectful and supportive community.  It was a humbling and empowering experience.

If I was to pick one overarching theme from the conference it would be hope. Kate Bowles set the tone of the conference with her profoundly moving and thoughtful opening keynote A quilt of stars: time, work and open pedagogy.  Along the way, Kate acknowledged and paid her respects to those who have shaped and supported her learning journey, from the traditional owners of the land on which she works, the Wadi Wadi Nation, though pioneering Irish astronomers, American solar quilters, friends and colleagues.  And Kate also gave us a moment of silence to re-member those who had helped us on our own open journeys and who were not able to be with us in Galway.

Feeling the love ❤️ many thanks! Please do let everyone know I’m not really ill or anything, just working for Government 😀

Kate spoke about the importance of our labour of care, and how we absorb that labour into our own open practice, but she also highlighted the risk that without a system wide ethic of care, open practice becomes another caring labour.  And we know that such labour usually falls to women and those who lack power and privilege. (This is a something that is very close to my own heart and the heart of the femedtech network.) But it was Kate’s closing note that really resonated with me throughout the conference.  Quoting Henry Giroux “Hope must be tempered by the complex reality of our times” Kate reminded us that although hope must be realistic about the environment we work in, change is possible, and that

“Hope is not a pipe dream, it is the most important resource we have. It is the heartbeat of our politics.”

Hope was also the theme of the closing address of the conference, with co-chairs Catherine and Laura separately and independently both choosing the same quote from Rebecca Solnit’s Hope In The Dark

“Hope is not a lottery ticket you can sit on the sofa and clutch, feeling lucky. It is an axe you break down doors with in an emergency. Hope should shove you out the door, because it will take everything you have to steer the future away from endless war, from the annihilation of the earth’s treasures and the grinding down of the poor and marginal… To hope is to give yourself to the future – and that commitment to the future is what makes the present inhabitable.”

The overarching theme of #OER19 pic.twitter.com/vs12jS4yAt

It seems fitting somehow that Galway was a place to tell stories. Kate began by quoting Jerome Bruner in her keynote “any story one may tell about anything, is better understood by considering other ways in which it can be told.” I heard many stories told in many different voices. Su-Ming Khoo told the Haida story of The Raven and the First Men and the opening of the world.  Johanna Funk shared her story of Learning on Country in the coastal homelands of Galiwin’ku with Dr Kathy Guthadjaka.  Lori Hargreave told her own deeply personal Tale of Resilience. When the audio technology failed us, Frances Bell stepped in and  gave voice to Suzan Koseoglu’s moving found poem reflecting the voices of Turkish womens’ stories of open and distance learning, which led to a powerful conversation about women’s anger when they are denied the right to education. (Huge appreciation to Tom Farrelly for chairing a technically challenged session with such sensitivity, ensuring that all these women got to tell their stories.)  But perhaps the story that spoke to my own heart was Sara Thomas’ Once Upon an Open, a story about rescuing two Scottish women, Marie Lamont and Lady Catherine Bruce of Clackmannan, from the forest of history, a story of orcs, and trolls and damn rebel bitches, a story of who gets to tell stories.

We were also telling stories in our University of Edinburgh workshop, Positioning the values and practices of open education at the core of University business, when Stuart Nicol, Anne-Marie Scott and I challenged participants to share stories of how openness could be centred and have impact in their institutions.  To provide inspiration we shared some of the amazing open licensed images curated by the University’s Centre for Research Collections and the results were as inspiring as they were creative.  We filmed the stories people told and as soon as we’ve got them online, we’ll share them on Open.Ed. 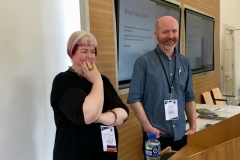 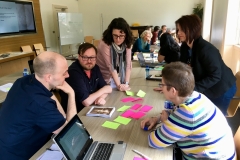 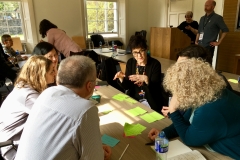 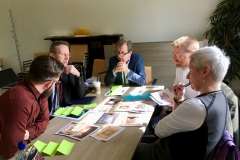 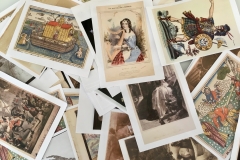 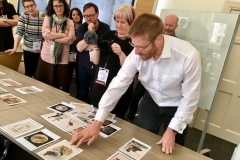 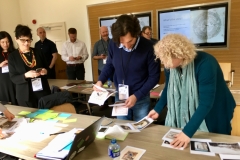 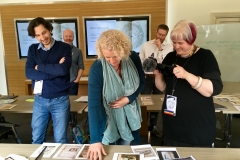 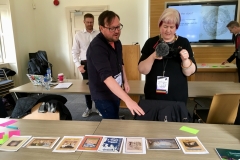 Decolonisation, dispossession and the need to foreground indigenous knowledge were other themes that ran throughout the conference.  In her challenging and thought provoking keynote, Openings – Bounded (in) equities; entangled lives, Su-Ming Khoo noted that while we would like to think of Higher Education as a zone of freedom, that freedom is bound up in our entanglements with power, capitalism, and the colonial present. She challenged us to unmask the colonial wound and use these open wounds to be the place where healing and suturing can take place, reminding us that there is honour and value in the art of repair, kintsugi.

“We need to address the psychological and emotional legacy of colonialism and the needs of both the oppressor and oppressed in order to overcome and transform.”

Su-Ming’s keynote made me think of my own people and their history of being both oppressed and oppressor; the Gaels who were cleared from their homelands to the ‘New World’ only to re-enact their own dispossession on the people they found there.

femedtech had a powerful presence at the conference.  Sharon Flynn gave a huge shoutout to the importance of the community in her welcoming address and we were overwhelmed by the positive response to the femedtech Open Space, femedtech.net, both in terms of the writing that’s been shared and the people who came to our open space session, where it was standing room only.

In their presentation on the open distributed network and shared curation model that is @femedtech on twitter, Frances Bell, Louise Drumm and Lou Mycroft explained that femedtech’s resources are passion, kindness, enthusiasm and volunteer time, all of which were present at OER19 in abundance.  If any one image sums up the femedtech community, it’s this:

It is such an honour and a privilege to be part of this amazing community.

If I have one regret from the conference, it’s that because I took part in so many sessions and was also on chairing duties, I missed dozens of talks that I really wanted to hear.  I had to duck out of Taskeen Adam, Caroline Khun and Judith Pete’s open praxis keynote panel so I’m immensely grateful for the recording of this and other sessions provided by ALT and OER’s amazing media team of Martin Hawksey and Harry Lamb.  Huge thanks to Martin and Harry for making sure these critical and necessary voices can be heard by all.

There’s one last point I want to reflect on before I round off this post…Not once over the course of the four days I spent in Galway, did I find myself stuck listening to That Guy(TM).  You know the one, I’m sure you’ve met him at many conferences, the guy (though they’re not always guys) who hogs the conversation and is tone deaf to the voices of those who lack his privilege.  I heard many, many diverse voices at OER19, but not once did I hear That Guy(TM).  So I’d like to thank Catherine, Laura, Maren, Martin and everyone who made OER19 such an empowering and inclusive conference, and ensuring that marginalised voices were listened to and heard.  It fills me with hope.