While I was off on strike I was able to spend some time finishing a project I’ve been working on for a couple of months; editing the Wikipedia page for Dunfermline College of Physical Education.  I was inspired to update the existing page by the recent Body Language exhibition at the University of Edinburgh Library which delved into the archives of Dunfermline College and the influential dance pioneer Margaret Morris, to explore Scotland’s significant contributions to movement and dance education. And the reason I was so keen to improve this page, which was little more than a stub when I started editing, is that my mother was a student at Dunfermline College from 1953 – 1956, and when she died in 2011 my sister and I inherited her old college photograph album.

My mother was not a typical Dunfermline student. Unlike many of her fellow students, who were privately educated and went straight to the college on leaving school, my mother was educated at the Nicolson Institute in Stornoway, and after leaving school she took an office job while working her way through the Civil Service exams.  She’d been working a year or so when the college came to the island to interview prospective students, and her father suggested she apply.  Her interview was successful, and she was awarded a place and a bursary to attend the college, which at that time was in Aberdeen.  Having experienced a degree of independence before going to Dunfermline, my mother chaffed at the rigid discipline of the residential college, which expected certain standards of decorum from its “girls”.  She didn’t take too kindly to the arbitrary rules, and it’s perhaps no surprise that her motto in the college year book was “Laws were made to be broken”.  She did however make many life-long friends at college and she went on to have a long and active teaching career.

My mother worked as a PE teaching on the Isle of Lewis, first as a travelling teacher working in tiny rural schools across the island, and later in the Nicolson Institute.  She passionately believed that all children should be able to enjoy physical education, regardless of aptitude or ability, and she vehemently opposed the idea that the primary role of PE teachers was to spot and nurture “talent”.  Her real interest was movement and dance and many of the children she taught in the small rural schools where convinced she was really just a big playmate who came to play with them once a week.  Sporting facilities were pretty much non-existent in rural schools in the Western Isles the 1970s. Few schools had a gyms or playing field, so she often organised games and sports days on the machair by the beaches. The first swimming pool in the islands didn’t open until the mid 1970s and prior to that she taught children to swim in the sea, on the rare occasions it was sufficiently calm and warm.  None of the schools she taught in had AV facilities of any kind and I vividly remember the little portable tape recorded that she carried around with her for music and movement lessons.  She retired from teaching in 1987, not long after the acrimonious national teachers pay dispute.  Despite being rather scunnered with the education system by the time she retired, it’s clear that the years she spent at Dunfermline played a formative role in shaping not just in her career, but also her personal relationships and her approach to teaching. Typically, she was proud to be known as the rule breaker of her “set” and I think she’d appreciate the irony of her old pictures appearing on the college Wikipedia page. 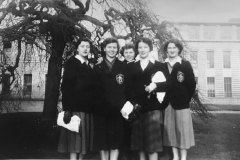 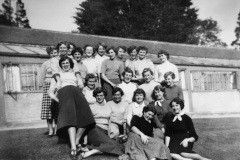 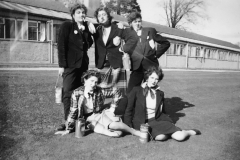 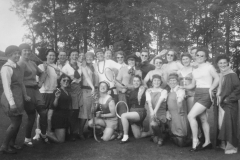 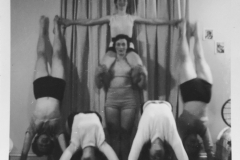 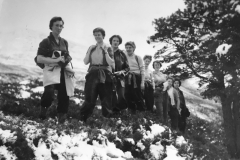 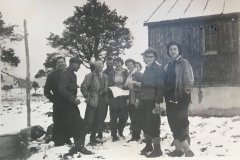 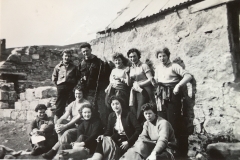 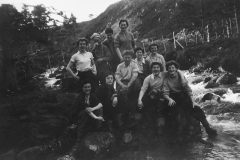 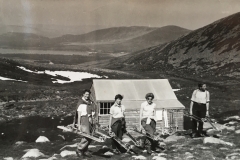 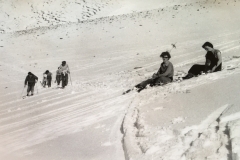 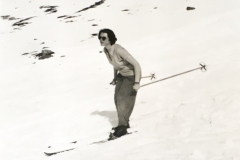 In order to add these images to Commons, I’m having to go through the rather baroque OTRS procedure, and I’d like to thank Michael Maggs, former Chair of Board of Wikimedia UK, for his invaluable support in guiding me through the process.  Thanks are also due to colleagues at the Centre for Research Collections, which holds the college archive, for helping me access some of the sources I’ve cited.

One last thing….when I was producing our OER Service Autumn newsletter I made this GIF to illustrate a short news item about the Body Language exhibition.

The gif is part of a beautiful 1950s film featuring students from Dunfermline College called Garden Dance, which was released under open licence by the Centre of Research Collections.  The film is described as “Dance set in unidentified garden grounds, possibly in Dunfermline” however when I was looking through my mother’s college album I found this picture of the very same garden, so it appears it was filmed in Aberdeen. If you click through to the film, you can clearly see the same monkey puzzle tree in the background. It was obviously something of a landmark!  I wonder if my mother is one of the dancers?